10 Ways to Maintain Musical Form During the Summer 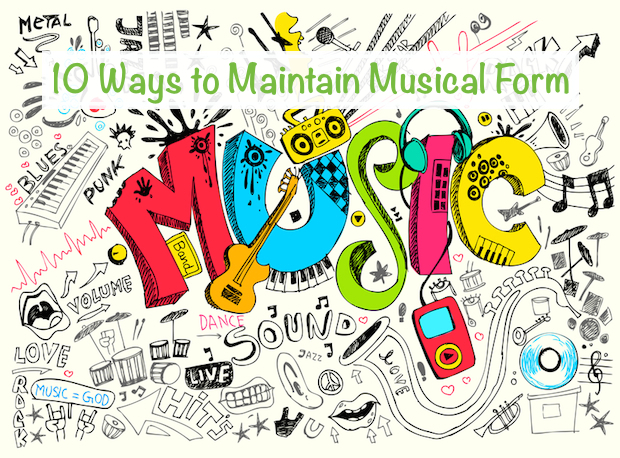 School’s out and band directors aren’t  hounding anyone to practice, but that doesn’t mean kids should put their instruments away. It’s very important to maintain your musical skills during the summer. Don’t put off practicing until “tomorrow,” because soon tomorrow will become the first day of the new school year and the musical “lip” will be lost.  Once the lip is lost,  it’s hard to find it again.

It only takes 10 minutes a day to keep up musical momentum, particularly if honing skills, rather than halfheartedly playing familiar songs over and over is the focus. Seriously, ten minutes! While it may not seem like much, it can be very effective. We have many ideas to help keep up the musical skill level that kids have attained during the school year.

Long tones are exactly what the term sounds like: holding tones for a long time. Starting off in the easiest range of the instrument (voices count!) is best, and the note chosen should be held as long as possible. Seeing spots means it’s too long, but having a lot of air left over means the tone isn’t held long enough. Long tones help keep the embouchure in shape and the lungs strong.

Playing high notes softly requires quite a bit of control on an instrument, and even the most non-musically inclined person can instantly tell the difference between a “good” high note and a “bad” one. If a high note is played with too much volume the sound will distort and crack (and babies will scream, dogs will bark, and glasses will break).  Keep the corners of the mouth firm when blowing high notes and, over time, notes will become easier to play and nicer to hear.

The best method for woodwind players to practice high notes and keep control is to play a low note first, and then add the register or octave key for the higher pitch. Start with the lowest note, then lift one finger at a time while blowing from low to high. For a challenge, start from high, then play to low.

A common mistake younger brass players make is thinking high notes mean a LOT of air and a LOT of pressure, when the opposite is true. Low notes use more air than high notes on all wind instruments. The secret to playing well-controlled high notes is using a small amount of air while blowing out a fast and narrow air stream. One way to test air flow is to hold the index finger 8 inches in front and try to blow on the fingernail. The air on the nail will feel like a small breeze blowing all around, and if it were a real candle, it will remain lit.

There is a noticeable difference in air flow when putting the same finger less than an inch in front of the lips and blowing at the fingernail.  The air will feel like a straight, narrow, pointed beam of cold air. Notice how the embouchure changed when blowing far away and close to the lips. When playing high notes, aim for the thin, stream of cold air.

Brass players can “buzz” into the mouthpieces to keep up facial muscle strength. Putting the lips tightly together and blowing to make a “bzzz” sound is the first step in learning the instrument, and keeping up the embouchure. It’s not as easy as it sounds, as the lips need to remain straight, and the “bzzz” sound should sound consistent. This needs to be done through the mouthpiece while taking breaks when the lips become tired.

Open up to the challenge of learning a new piece of music this summer, one that is at a higher level than normal.  Work through a small section at a time until it is mastered. Working small instead of playing the piece from front to back over and over will ensure a better understanding of the music. Picking different sections to work on at a time rather than playing the music in order can help stave off boredom.

The lungs, hands, fingers, lips, and tongue aren’t the only things that need practice, the brain needs it too! Sight reading is the ability to read through music correctly (or close to it) upon first sight. Some musicians are better at this than others, and this is because they can read music differently than others. Many musicians look at every note individually, rather than ahead at each measure. Instead of seeing four eighth notes, think of 2 sets of 2 notes. Four groups of sixteenth notes are easier to grasp quickly than counting sixteen eighth notes. Grab some new music and play through it without stopping. Do this a few times over a week, and then go back and look at the music and notice any patterns in rhythms or notes.

10. Have a Recital or Talent Show

Arrange a recital in the garage or back yard for friends and neighbors. A month ahead of time invite friends to play or perform, and invite other friends to be in the audience. Throw in a few programs, punch, and cookies and there’s one happening music party.  Not only will this be memorable and fun, but the crowd will be wowed by the techniques that have been practiced!

Practicing shouldn’t be a drag or a chore, but rather a fun challenge. It’s easy to become frustrated when playing an instrument, and everyone fumbles and occasionally makes mistakes. By working through trouble spots diligently, progress will be quickly made.  Practicing 10 minutes a day, five days a week, for two and a half months, clocks in 500 minutes worth of practice, which is almost eight and a half hours! Adding just a few more minutes to the day will make even more of a difference.

Joe Pizzuto-Pomaco is an educator, writer, and editor who has taught in public and private schools 15 years.