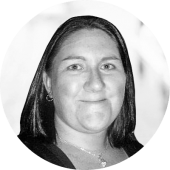 Out of This World Space Events to Watch with Kids 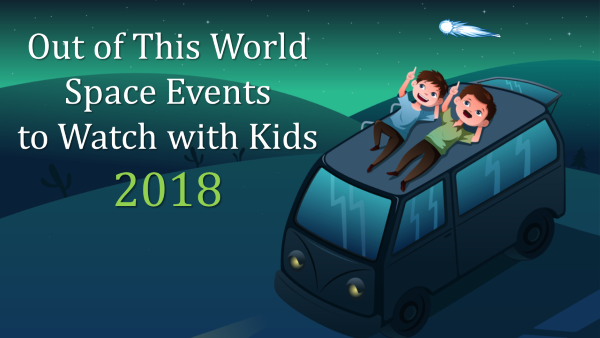 The total solar eclipse of 2017 may have captured the astronomical spotlight last year, but 2018 brings a cluster of stellar events worth viewing as well. This year, encourage kids to head outside and look to the sky. Here are some not-to-miss celestial events to watch with kids in 2018 along with easy ways to incorporate them into your curriculum.

The phrase “once in a blue moon” describes something that happens rarely, but a blue moon is actually not as rare as you might think. On January 31, 2018, you can actually view a blue moon for the first time since 2015. A blue moon is the second full moon in a month, an event that normally occurs only about once every two and a half years. As a bonus, there will be a second blue moon this year on March 31, leaving February without a full moon.

Not only will there be blue moon on January 31, but there will also be a supermoon and a lunar eclipse! Supermoons can occur several times a year when the full moon coincides with its closest approach to Earth in its orbit. Add to that a lunar eclipse, sometimes called a blood moon because of the moon’s reddish tinge, and you have a trio of reasons to encourage kids to observe the moon on January 31. The Super Blue Blood Moon offers a perfect real-world event for studying cyclic patterns of the Earth-sun-moon system. Prepare students ahead of time by having them watch NASA’s video, A Supermoon Trilogy, and completing our lessons on Lunar Phases and Lunar Eclipses. 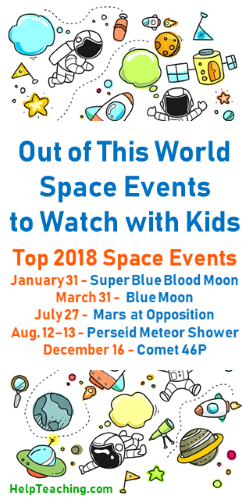 Mars is the headliner for 2018 space events. From books to movies, there may be no planet that captures our imaginations quite like Mars. On July 27, Mars will be in opposition, making it fully illuminated by the sun. In addition, it will be the closest to Earth it has been since 2003. Other than the moon and Venus, Mars will be the brightest object in the night sky. Kids will have to wait until 2035 to see Mars this closeup again. Then again, maybe they will be the generation to first step foot on the Red Planet!

Use this space event as an opportunity to connect astronomy with literary skills. Elementary students can work on creative writing with this One-Way Ticket to Mars writing prompt. Our Earth vs. Mars reading passage will get middle school students contemplating the challenges of living on Mars. Introduce high school students to the Elements of Science Fiction with this video lesson, and then have them read and analyze a work of science fiction. Try Ray Bradbury’s classic book, The Martian Chronicles, or Andy Weir’s contemporary work, The Martian (the classroom version is edited for language and includes discussion questions and activities).

Meteor showers happen regularly throughout the year. Luck would have it that this year, the Perseids, one of the most active meteor showers, coincides with a new moon, bringing dark skies and ideal viewing. The Perseids peak on August 12 – 13, and is a great Northern Hemisphere meteor shower because of the high number of meteors and warm summer nights. Use our online Meteor Showers lesson to teach kids about why and when they occur, and then encourage students to go out and count “shooting stars.”

Get the kids to bundle up and head outside on December 16, for a special viewing of Comet 46P/Wirtanen. There is a chance this comet, which orbits the sun every 5.4 years, will be viewable with the unaided eye. A basic pair of binoculars should offer enough magnification to catch a good view of this “dirty snowball” as it passes Earth at its closest point. However, should the weather not cooperate on December 16, there is still plenty of opportunity to spot the comet as it should be viewable for most of December.

Use the video, Close Approach Comets, to introduce students to 46P and our Solar System lesson to give them an overview of how comets fit into the solar system. Then, have kids build model comets before heading out to do some real-world comet spotting!

These are some of the most astronomical events for 2018. The year is sure to bring other out of this world reasons to head outside and view the cosmos with kids. Of course, astronomy is always accessible simply by enjoying the wonders of stargazing on a clear night!